According to Albert Einstein the definition of insanity is doing the same thing over and over and expecting different results. Despite the flaws in this aphorism (since practice can make perfect) I’ve always appreciated its invitation to keep moving forwards and not stagnate on a road to N-O-W-H-E-R-E new.

My reasons for going sober

I became injured seven weeks out from the London Marathon which forced me to withdraw my place. I was gutted. On Sunday 22nd April all I could do was hobble to the side lines of arguably the greatest marathon in the world to support and cheer on the champs who ran the hot heroic 26.2 miles. To see the enormous efforts of all runners and watch them overcome such a gruelling physical and mental test was incredibly moving. In some cases, a mere 100 meters from the finish line, loved ones would leap to the aid of their significant runner providing the strength and support to cross the finish line. A metaphor for life if ever there was one.

When it comes to life lessons the most valuable of mine so far has been to squeeze every last drop of juice from any lemon that you encounter. As you’ve read in a previous post, I went to Thailand to undertake a physio and fitness programme at world renowned luxury health resort Chiva Som in Thailand for The Evening Standard newspaper (click here to read) followed by completing Hawkes Bay 10K race in New Zealand and then Sydney’s half marathon. Getting stronger and completing these races made me feel euphoric. I felt like life was telling me with absolute certainty that I was on the right path with no barriers such as booze to restrict my progress.

The Booze Life in London

As a qualified PT and fitness blogger it’s perhaps no surprise that I’ve always been relatively healthy. However, living in London and embracing the social life comes with its fair share of alcohol units. And, don’t get me wrong. For the most part I’d enjoyed the abandonment that came with the alcohol consumption and felt some hedonism was needed after a soul destroying break up two years ago. I’d partied in forests in Croatia, let loose in Ibiza, attended some festivals here and there and when I was in London I’d drink moderately about three times a week. Not extreme by most western standards but the inevitable repeated hangovers started to feel like massive and unacceptable wastes of time, energy and health and I knew this cycle would never allow me to optimise my fitness or general life goals. I felt it was time to stop being a jack-of-all-trades-master-of-none kinda gal and focus on the mastering, as much as I could. I was curious about what I could achieve and I was ready for a change. So I signed up to Berlin marathon in September and decided to go sober to get myself fully in the game.

I’d booked a holiday some months before with a single girlfriend (Miranda) to Mykonos AKA partaaay island. M and I had been each other’s night owl wing-women for the past year.

I’d previously envisioned a jack-of-all-trades kind of holiday. A little bit of fun, a little bit of sun and a little bit of sight-seeing plus marathon training. But then I’d had my sobriety epiphany. I couldn’t back out of the holiday – nor did I want to. So I told M about my plan to go sober. Our initial modest holiday however had now transformed into a bigger affair. We would now be staying with M’s new guy friends (Jacob and Henry). They owned a villa and club in Mykonos and there were also a few more people who had joined onto the trip. I was apprensnive about how my new holiday objectives would work out especially now I’d be staying in a party villa so I  decided to get some sobriety practise in before we departed.

This meant turning down some invitations. It was a weird feeling to sometimes say no having been so accustomed to being a “yes” girl and initially M seemed disappointed about my decisions to turn down a late-night dinner/drinks invite which I knew would be fuelled by booze and most likely lead to the same scenarios which I’d experienced for the past year. Not that those scenarios were bad but they weren’t going to provide me with the change I felt ready for. Of course it would have been entirely possible to go and not booze but I just didn’t want to deal with the 20-something questions that accompany any declination of alcohol and it felt good to stay focused on the end goal. “I wish you were here you’d love it” M would SMS me late at night and “call me if you change your mind” she’d encourage after we’d gone our separate ways after a dinner and she’d stay out whereas I’d split. I appreciated her efforts to extend words of support even though I felt she was disappointed about my decision. 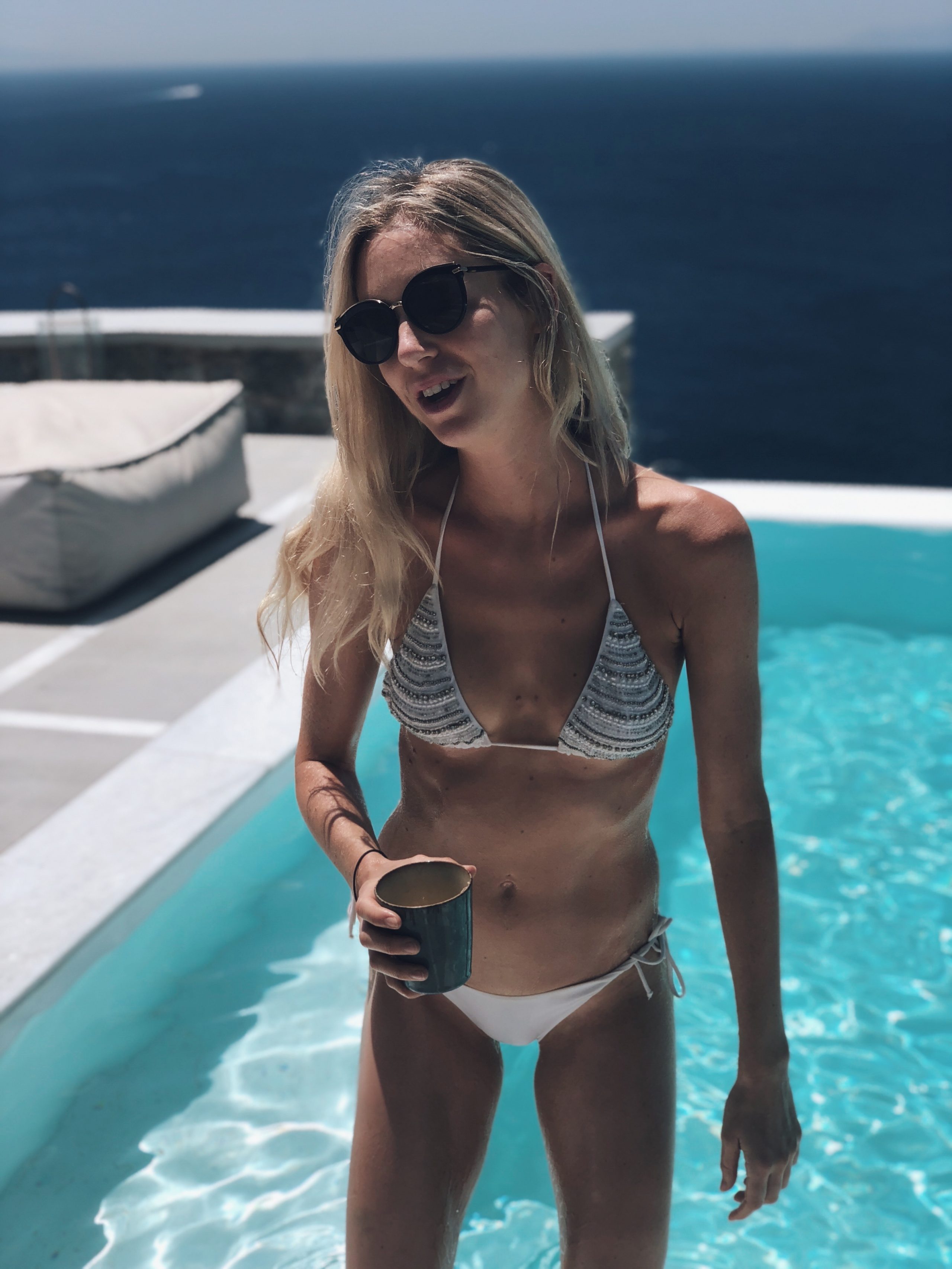 I nearly caved and ordered a cocktail on two occasions.

My week in London without booze proved a challenge. It was also very revealing. The first devil on my shoulder appeared on a Monday night. I’d slept badly the night before and as a result I felt tired, emotional and stressed. By six o’clock in the evening I had a big desire to round the rough edges with a drink which I knew would lubricate me through the work event I’d committed to weeks ago. (NB I never drink alone let alone on a Monday night. No judgement to those who do either but it’s just not what I do. It was interesting to notice my craving nonetheless.) I stayed committed to my sobriety and sipped a green juice and chowed down a power bar to fuel me through the evening. This decision made me more mindful of what it was I was actually feeling rather than boozing over it to just make things momentarily easier. The healthier decision was one which was helping not hindering me to achieve my goals.

The second big booze thought bubble appeared at a friend’s birthday. On my way to the venue someone had driven head on into my car whilst I was making a U-turn. In haste, the driver had tried to overtake me without seeing I was turning around. It happened in a flash. One minute I was singing along to Do it to me one more time on Magic FM (guilty) and performing my U-turn and the next – WHAM. The nose of the driver’s car had gone right into my side door and I couldn’t t help but think that if he’d been going any faster then the greater impact would have meant curtains for me. That could have been it I thought in horror. I remained calm however, exchanged insurance details with the rather hot-headed driver and drove on to the party.

I’d not seen my friend for months and the summer’s evening and atmosphere of celebration coupled with the preluding collision meant that the smell of rose and champagne proved almost too much to resist. But I did. And I ended up having great, insightful conversations with both strangers and friends because of it. My sobriety ended up becoming the topic of conversation for the most part. Fuelled by an espresso shot and soda and lime only I felt myself engaging with people on a deeper level, talking about things that mattered to me and in exchange they did the same. I left the party at a respectable time feeling energised and inspired by the interactions I’d had. I even arranged to go to my friends’ fathers introductory talk on meditation having had a scintillating conversation with him about it. I’d been looking to learn more about meditation so this would be perfect I thought happily. The next day, when many of my friends were complaining of a hangover I got up, drank some hot water and lemon and went for a run. I also exchanged messages with three of the people I’d met at the party. Two were people I would collaborate with on a work basis and the other was a sweet girl who I found I had much in common with so we fixed a time to meet again soon. It’s funny that when you set clear goals and objectives and act with intention, the opportunities do open up. 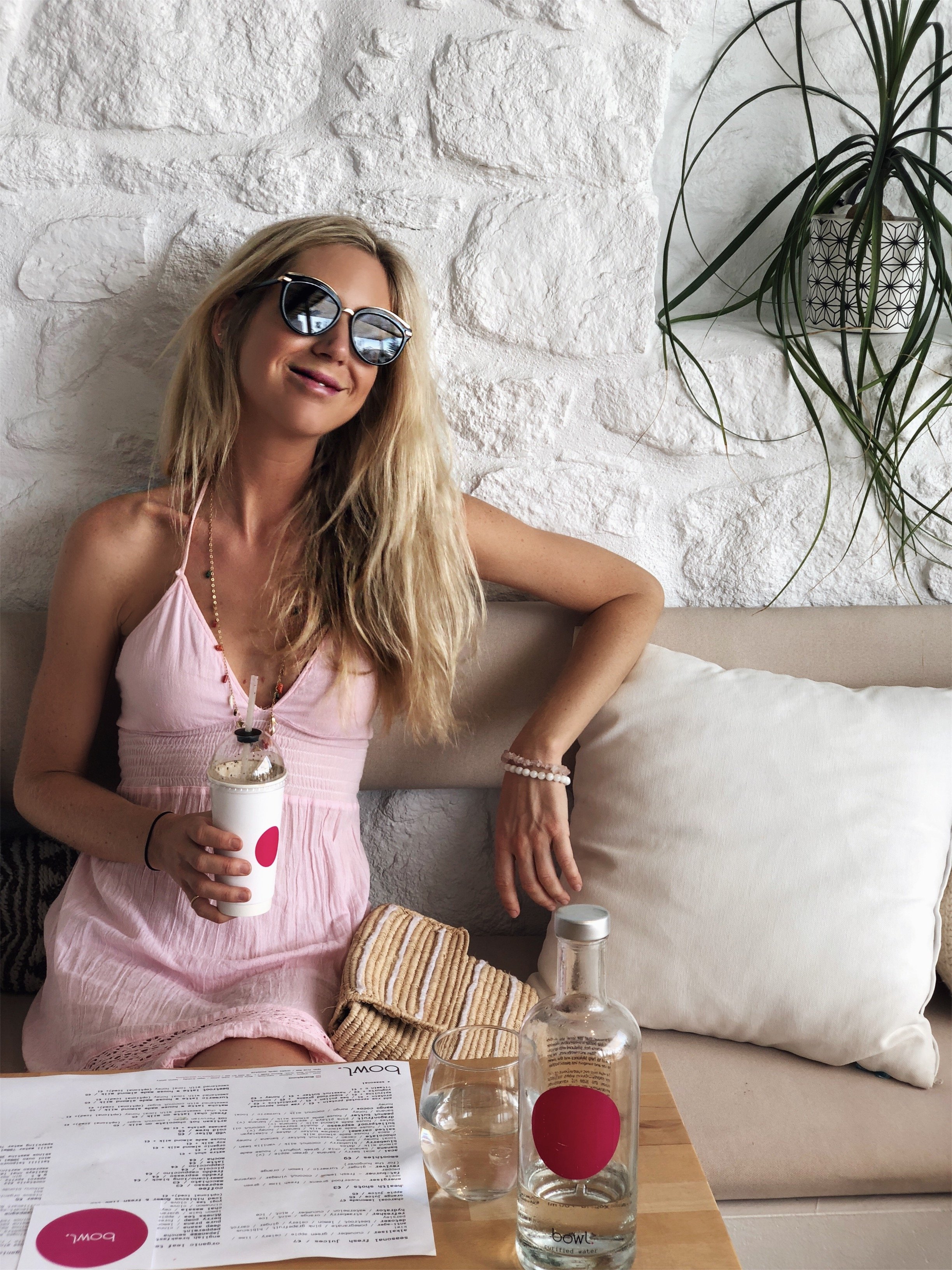 Sipping a smoothie in Mykonos

The NHS identifies the below health risks associated with heavy drinking:

The main benefits I was looking forward to experiencing as a result of sobriety were:

Cornish state of mind with MBFR

5 of Amsterdam’s finest Brunch Spots: the Super healthy, super indulgent and everything in-between!

One year on from the first lockdown. Taking time t

The power to transform is all in your mind. #hea

Little reminder that although you may feel alone s

Shawn Anchor’s research found only 10% of our ha