Vitamin Infusions: Are they worth the hype? 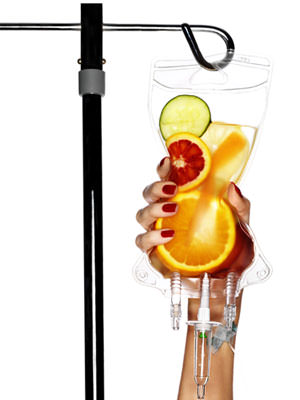 Although vitamin infusions are nothing new, my opinion of them is. I initially thought that the infusions were unnecessary and ineffective – a ploy to persuade people to fork out money for something they could just get from a healthy diet.

But then I met the super charming Scotsman and one of London’s leading anti-ageing skincare specialists, Dr David Jack, (I went to see him at his Harley Street clinic for a consultation and ended up getting an infusion and a facial – more on the latter later) who explained the science behind the infusions, and why they work much better than a berocca (for example) for those who are feeling rundown or have conditions like diabetes and chronic fatigue.

Now for the science part

The infusion not only has a much higher dose of ingredients when compared to oral supplementation but the IV (‘parenteral’) route ensures that the absorption is 100%, rather than less than 50% for most oral supplements. In addition, many oral supplements of proteins/tripeptides e.g. glutathione are likely to be broken down by the gut into their constituent amino acids, meaning taking them orally is pointless.

Included in the drip that Dr David Jack gave me are: high dose IV Vitamin C, Vitamins B1, B2, B3, B5, B6 and B7 (or vitamin H, biotin).  All of these are antioxidants and also co-factors in multiple intracellular cascades involving energy production and immune function.  A high dose of glutathione, which is probably the most important endogenous antioxidant (involved in various cytochrome P-450 reactions, DNA synthesis and repair, amino acid transport, iron metabolism, nitric oxide cycle regulation, protein synthesis, prostaglandin and leukotriene synthesis and many other intracellular processes) is also included as well as zinc, selenium, molybdenum, iron, folate, and a low dose of magnesium were also in the infusion.

Dr David Jack tells me there’s been a lot of evidence (although he hasn’t specified what this is) that depleted levels of glutathione are implicated in various different conditions including chronic fatigue syndrome, parkinson’s disease, diabetes, and many others – and IV supplementation is believed to be the best route for supplementation (as this is a tripeptide). The idea of the infusion is that it’s giving a dose to ‘top up’ levels of things that may be missing from your diet, and your body will discard what it doesn’t need to maintain homeostasis.

First and foremost everyone needs to ensure they’re eating a well-balanced diet and leading an active lifestyle. However, we all go through times where our immune system takes a bit of a beating and our bodies feel total depleted (hello Christmas and New Year’s). Furthermore, it’s important to consider those who suffer from conditions such as diabetes and chronic fatigue – who could especially benefit from the infusions.

Since the body excretes anything it doesn’t need without causing any damage – I decided to try the infusion. I’d been feeling a bit tired and susceptible to colds and after a talk with Dr David Jack, decided I had nothing to loose.

The infusion is administered via IV. It’s not painful and the process takes 30 minutes. It gives a cold sensation as it goes into the arm and it was bizarre to ‘taste’ the vitamin C in my mouth, which was just like berocca.

Did I feel any different?

I can’t say I felt any different – but maybe I’d have felt worse without the infusion – I just don’t know. So would I recommend it? If you’ve been feeling rundown despite a good diet and exercise regime – then I’d definitely advise going to see Dr David Jack. I have no doubt that his sunny, welcoming demeanor and expert opinion will leave you feeling much brighter if nothing else.

Dr David Jack recommends one infusion per month but those very deficient can have one as regularly as once a week.

My Kind of Mindfullness and It Doesn’t Cost a Penny

The Sickly Sweet Truth About Sugar

Thanks for the mention Lose It Magazine!